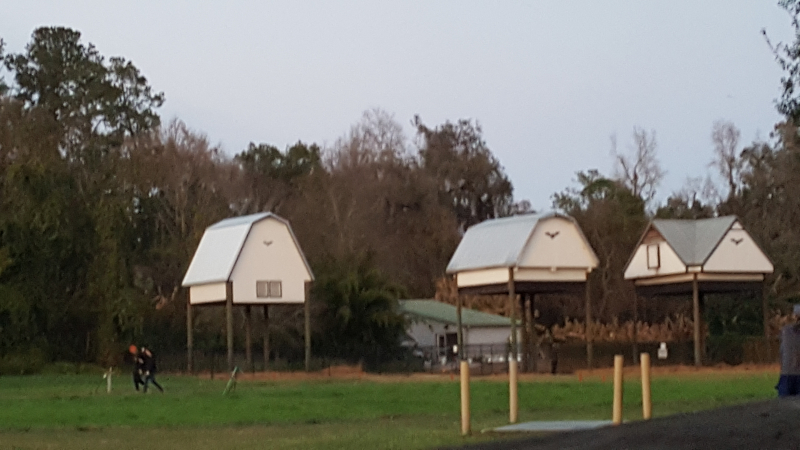 I have blogged before about the University of Florida bat houses. We have been there numerous times to see them, but never when the bats were emerging to feed. Until now!

This past weekend, we were in Gainesville for a soccer tournament. When the game ended, we rushed straight over to the UF bat houses, which are on the campus of the University of Florida, so we could catch the bats emerging from the bat houses. You have to get there around dusk in order to see them coming out of the bat houses so they can eat, and being that it is the beginning of February, we had to get there kind of early. We made it just in time.

As we pulled into the parking lot we could see the bats began emerging from the houses. We raced down the sidewalk to catch the display of many of them flying out. It was awesome! I took a quick video, but it was after they were already out of the houses and flying around to catch insects.

If you will be in Gainesville, be sure to stop by and check out the UF bat houses. They are the largest occupied bat houses in the world. They currently house between 450,000-500,000 bats, but the three houses can hold up to 750,000 bats. Seeing the houses is cool, but it's awesome to see them emerge to eat!

There was a small crowd there to see the bats, so I imagine most nights there are people there to witness it. There is a parking lot next to the bat houses where you can park for free. There is a smell that was in the air, which is from the bat waste. It can fall on you, too, but that didn't happen to us. Overall, a great thing to see and I'm glad we made it.

Whatever month you will be in Gainesville, stop by the UF bat houses around dusk to catch the bats emerging to eat. There are more that emerge during the summer months, but it was still a nice display in the winter, too! Check out my video below from the UF bat houses visit when the bats were stirring: